February 08, 2011
When I watched Friday's GH I was positive Carly destroyed Brenda's wedding dress. She's been acting a little crazy lately anyway and I was sure that Michael's problems finally pushed her over the edge when I heard her conversation with Sonny. I'm sure there was a big part of her that thought it was in Michael's best interest to tell Sonny what happened to him. However it was clear that her primary motivation for talking to Sonny before Michael had a chance to was to make sure he blamed Dante. When that didn't happen she turned her attention to Brenda, implying that she would hurt Sonny, which would in turn hurt Michael. Of course Brenda hurting Sonny is primarily contingent on Carly telling him about Brenda's baby at the wedding. Carly is so worried about how Sonny's reaction to hearing this news will affect Michael, yet she is the one who insists on delivering it and in the worst possible way. 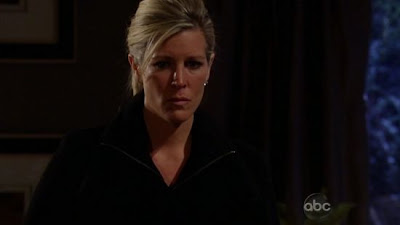 Obviously Carly has issues with Brenda and with seeing the consequences of her own actions, but I don't believe she destroyed the wedding dress. She is obviously being set up by someone who knows how she feels about Brenda. My guess is that Suzanne destroyed the dress. She has unlimited access to Jason's apartment and I'm still very suspicious of her. I'm sure everyone will blame Carly though, just like everyone blames Robin for the crazy things that Lisa does. In fact given everything that Robin has been through with Lisa she might want to be careful about accusing Carly without proof. 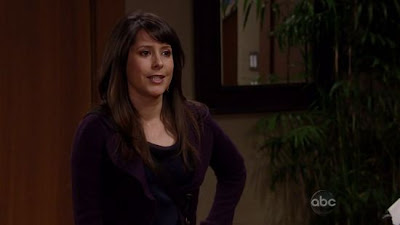 Popular posts from this blog

April 23, 2020
I can't believe it has almost been five years since I first told you about the web series L.A. Macabre.

As you may recall, L.A. Macabre is very much a show within a show, where the main characters have a web series called L.A. Macabre, which explores notorious, real-life crime stories in Los Angeles.


The focus of that show soon shifts to a former cult called "The New Family," bringing a lot of unwanted attention to Ryan, Jamie, and Colin, the show's creators.

This ultimately leads to Jamie's mysterious disappearance in the last episode of season 1.


Recently, I had the privilege of getting a sneak peek of L.A. Macabre's long-awaited second season and all I can say is WOW!

As impressed as I was by the show's first season, season two surpassed all of my expectations. Everything is bigger this season - the show's settings, the storyline, and the exceptionally talented cast.

May 31, 2018
It is rare that I get excited about a new show these days. There is so much content to view on television and online, and unfortunately most of it is not worth watching. So when a show comes along that I believe in I have to share it with everyone.


Like Amazon Prime, Hulu, and Netflix, YouTube Premium charges a monthly fee. In fact so many of these streaming platforms seem to be popping up I probably never would have checked out YouTube Premium if not for all the buzz surrounding its show Cobra Kai.

Cobra Kai, as you may have heard, is based on the original Karate Kid movie from 1984. This is not, however, your typical reboot and it is not a reimagining of the story we all grew up with. Instead, Cobra Kai broadens our perspective of the Karate Kid characters and the possible motivations behind their actions.

July 28, 2010
Dr. Lisa Niles's inability to take "no" or "never again" for an answer may turn out to be the thing that finally makes this character and her storyline worth watching. I really hope General Hospital is planning on taking the psychotic ex-girlfriend route with her because it would finally give me a reason to care about this otherwise boring triangle. Not to mention the fact that it would teach Patrick a valuable lesson of why it is a bad idea to cheat on his wife.


The crazy, unstable ex-girlfriend plot almost always makes for an entertaining soap storyline. In fact some of the most memorable performances from soaps have been given in the context of demented exes seeking revenge or vindication of some sort. I can still recall many of the scenes in which Cynthia Watros portrayed Josh Lewis's jilted wife Annie on Guiding Light. She made a near seamless transition from mild-mannered nurse to Josh and Reva's worst nightmare overnight. And who could forget Anni…
4 comments
Read more

Paula's Soapbox
Paula graduated cum laude from Tennessee Technological University with a degree in Interdisciplinary Studies emphasizing English and Communication. She developed a love for the soap opera genre at an early age and has since been drawn to anything dramatic. In high school Paula won the leading role in her first play and remained active in the theatre until graduating. She then went on to participate in college level theatre courses while working toward her degree. At the end of her freshman year she entered and won an acting contest which earned her a walk-on role on "That 70's Show." Once she completed this acting stint, Paula returned to college and started writing, and has been doing so ever since. In 2013 she created Paula's Soapbox LIVE, a LIVE video chat interview show. Since then she has chatted with numerous people in the entertainment industry, including Julie Ann Emery, Keaton Simons, Martha Byrne, Kevin Brief, Tracy Melchior, Natalia Livingston and many more! She is currently working as a freelance writer and is available for writing opportunities and social media management.